We have met in Japan, we lived in Japan and China, we have experience and we are complementary. During our time in Asia we also met with Taoism and the philosophy of Yin and Yang, which we repeatedly study, also because of our discrepancy and personal differences.

Both meanings seem clear and unmistakeable. The majority of western authors identify them as opposite pairs. Yin and Yang however, whilst opposite are also pairs or forces which complement each other. (From www.fid-gesundheitswesen.de – slightly adjusted)

The Yin and Yang symbol with its waves indicating that the opposites keep swinging in balance has inspired us for the logo of our company. We wish to express that the three areas of our service may consist of opposite items which complement each other. This leads to the swing, which we hope to bring to YOUR environment. 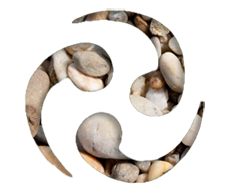